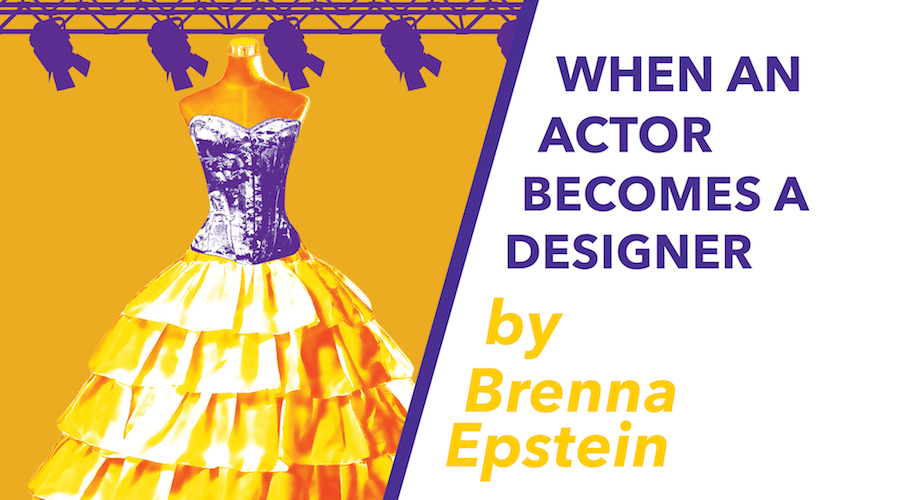 By Brenna Epstein (Assistant Costume Designer, 10 Out of 12)

Can you imagine a world where every day feels like a tech rehearsal? I can. I’ve been living in it for the last four weeks, and trust me, it’s truly not as grueling as it sounds.

My name is Brenna Epstein, I am a junior BFA Acting major, and I am currently playing the role of the Assistant Costume Designer in 10 Out of 12 by Anne Washburn, directed by Maureen Shea. I should specify that I’m not the assistant costume designer for 10 Out of 12, but instead, I am the assistant costume designer for the play within this show, called Delirious. Over the last few weeks, I have had the pleasure of working with an incredible cast and crew on this incredibly complicated, yet spectacular show, and this experience has truly opened my eyes to a new side of tech that I wasn’t familiar with before.

As an actor, I haven’t had a lot of experience in the world of costuming. However, about a week before our first rehearsal, Maureen emailed the cast members who are playing technicians and designers and gave us the opportunity to observe a 10/12 rehearsal for another Emerson Stage show, called Augusta and Noble. For a couple of hours, I followed the costuming team around as they worked out what needed to be worked out during their rehearsal, taking as many notes as I could and writing down quotes that stood out to me, including:

“Do you think her vest can be steamed?”
“Lost a button again. The same button. It’s cursed!”
“A jean jacket might look nice. It’s teacher-y.”

Even though my time shadowing during Augusta and Noble was short, I’ve also been learning a lot from the costume designer of 10 Out of 12, Hana Brown, and the rest of the wardrobe department at Emerson. During rehearsals, Hana gave me ideas of what a costume designer would be doing during a tech rehearsal while the rest of the technical team was working through cues. This includes fixing a skirt that looks crumpled, putting bobby pins in someone’s hair, and sewing costume pieces that need slight alterations. It’s a lot of simple tasks, which to some people might be boring, but I actually think it’s very interesting because I’m immersing myself in a new world that I’m not very familiar with. Even though I do know how to put bobby pins in someone’s hair, to do it in a tech setting just feels different because every single detail and movement executed has to be specific. Maureen often told us in rehearsals that every task has to be done with purpose. Don’t just do something for the sake of doing it. Really look into what needs to be fixed, and fix it.

Even before rehearsals for this production started, I was already sort of fearing how the 10/12 process for this show was going to play out because I wouldn’t just be experiencing ONE tech rehearsal; I’d be experiencing TWO! At the same time! However, now that tech is underway and everything is going pretty smoothly, I realized I really had nothing to be afraid of. Tech is a process, and sometimes it’s a pretty confusing process, but it needs to be done for a show to flourish. Of course, there might be a couple of moments of confusion over whether it was our own stage manager or the stage manager for Delirious who called for a ten-minute break, but aside from that, all of our tasks are getting done, and we are making progress. I’m especially enjoying watching the designers work in this environment, and I have gained so much respect for them. They work so hard to bring these works of art to life, putting their blood, sweat, and tears into something they are so passionate about. The designers on this project have inspired me to not get frustrated with myself if something doesn’t work the way I want it to, and to continue refining my skills to the best of my abilities. It might sound cheesy, but I’m genuinely thankful for them. I’m thankful that I was given this opportunity to become one of them for a short period of time.

10 Out of 12, directed by Maureen Shea, opens on Thursday, November 21 and runs through Sunday, November 24 in the Semel Theater. Tickets ($12 for general public and $8 with Emerson ID) are available at bit.ly/10-out-of12.