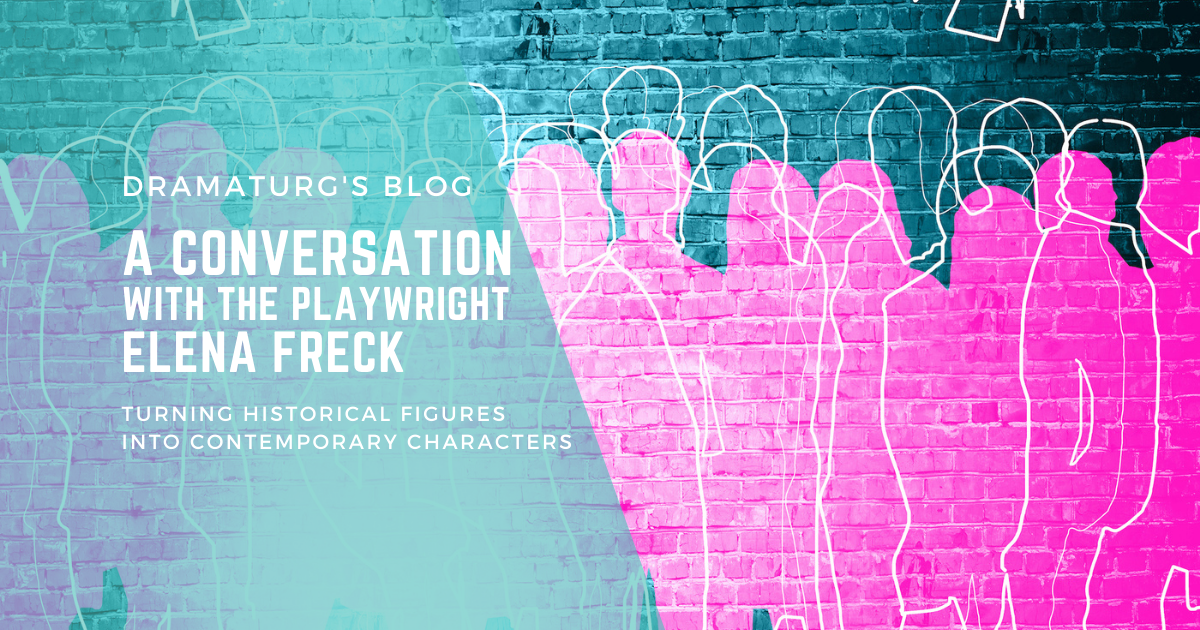 An interview with the playwright of Three Romances for the Unwell and Otherwise, Elena Freck. Conducted by Victoria Isotti, Dramaturg.

Victoria Isotti: What initially drew you to the story of Clara and Robert Schumann?

Elena Freck: I grew up as a violinist; I played in orchestras all throughout school and my dad works for a symphony. I don’t know where exactly along the line I learned the story, but somewhere I heard it and I thought it was fascinating. It’s part classic love triangle and part tragedy about mental illness in Europe in the 19th century. It’s a story that definitely stuck with me. When I was thinking about what play I wanted to work on last summer, I thought for a moment about writing a biographical play about the Schumanns and Brahms, but then I realized that that would take a lot more research than I really had time to do and I wanted to make sure that if I was going to do that, I would get it right. I also was thinking about our lives as artists in our twenties, this time in our lives when we’re young and we’re figuring out how to make art and how to relate to each other. I combined these two ideas and ended up transposing the story of the Schumanns and Brahms to the modern-day, so I could play with it without messing with historical accuracy.

VI: You’ve begun to discuss this a bit, but what inspired you to put the story of the Schumanns’ marriage into the setting of present-day Los Angeles as opposed to anywhere else?

EF: I know there are a lot of musicians around our age trying to make it work in the indie music scene in Los Angeles right now, working as a duo with a producer and a vocalist. I think that’s a really interesting model for generating new music. I watched the Billie Eilish documentary on Apple TV last summer and I loved it. I thought that the artistic relationship that Billie Eilish and Finneas have is really fascinating and I was definitely inspired by that. Despite being from the West Coast, I’ve never been to LA, so I extrapolated a little bit from what I know and from friends who live there and decided to set it where this kind of music is happening right now.

VI: Three Romances for the Unwell and Otherwise incorporates both music by Clara Schumann and Robert Schumann and present-day indie/pop music. How did you go about curating this playlist?

EF: I have a playlist that I was writing to that is hours long, way more music than what actually ended up in the play. I started making the playlist before there were any words on the page. That was a sort of writing tool for me, to bridge the two ideas that I had, and then I ended up thinking that it really worked. I loved when Spotify would crossfade one of the Romantic era pieces into something really contemporary. I loved the sound of that and the feeling that it gave me when I was writing, and so I decided to use it.

EF: Last summer I was working with Emerson Stage as a season planning assistant for the 2022-2023 season, and through that, I got a good insight into what works for productions at Emerson Stage and what doesn’t work. Also, I knew that I wanted to write a new play to try to submit for the Rod Parker award. I had the initial idea for the play around May. I thought about it for two whole months before I really put anything on the page. In July I started writing, and a big chunk of it I wrote in September when school started again. I finished the first draft the day before the deadline in September.

EF: As I said earlier, I knew how much research it would take to actually write a biographical play about historical characters in this case. I didn’t have a dramaturg who I was going to be working with from the start, and I didn’t have the time to accomplish all that research myself, so I knew that instead of doing that, I should take another route. I also think that working as a dramaturg in the limited capacity that I have has taught me a lot about structure and whittling down my writing into the barest bones that it can be, and not having any extra fluff. One of the designers on the show asked me if I had any deleted scenes from the play, and I said no, only the ones that existed inside of my head that I decided to cut before they ever made it on the page. I think my dramaturgy training helped with that.

VI: What do you hope audiences will get from seeing this show?

EF: I hope that people really connect with the characters. I took the historical figures and really ran with them, and made them into completely different people from the composers upon whom they’re based. The characters really became their own as I wrote the play. I hope that audiences empathize with them, and become friends with them in their heads. I hope the characters stay with audience members after they leave the theater. I also hope that specifically with the characters of Clara and Robert, people identify and empathize with both of them. It can be really hard to be in a position where you need to be taken care of, as Robert does. And it also can be really hard to want to care for a loved one who’s struggling, but not know how to accomplish that. I think a lot of people have been in both of those positions, and I hope that audiences identify with both.

VI: What characters do you relate to or see parts of yourself in?

EF: I see myself as both Clara and Robert. I think their relationship comes from two different sides of me, and in those two different positions that I’ve been in. I would like to relate to Joey more because he’s a really good listener and he’s really good at taking care of people. I think we can all strive to be Joey. We can also strive to be Seth because Seth is so fun, and he cares by bringing the fun and the humor. We could all use a little bit more of that, too.

VI: What has been your favorite moment so far of having Three Romances for the Unwell and Otherwise produced by Emerson Stage?

EF: I think the first time that I saw the scenes on their feet, after Joe blocked them and the actors were running them together for the first time. Hearing the actors really do what they do best, and hearing them make choices that were completely unexpected for me, but that I loved nonetheless. The actors making the characters their own has been extremely rewarding.

VI: What are you looking forward to seeing onstage?

Emerson Stage’s NewFest 2022 Rod Parker Playwriting Fellowship Award Winning play Three Romances for the Unwell and Otherwise by Elena Freck and directed by Joe Antoun opens to the public on Thursday, March 24 at 8 p.m. EDT and runs through March 27 at 2 p.m. EDT. More information and tickets are available at emersonstage.org/newfest-rod-parker-2022.