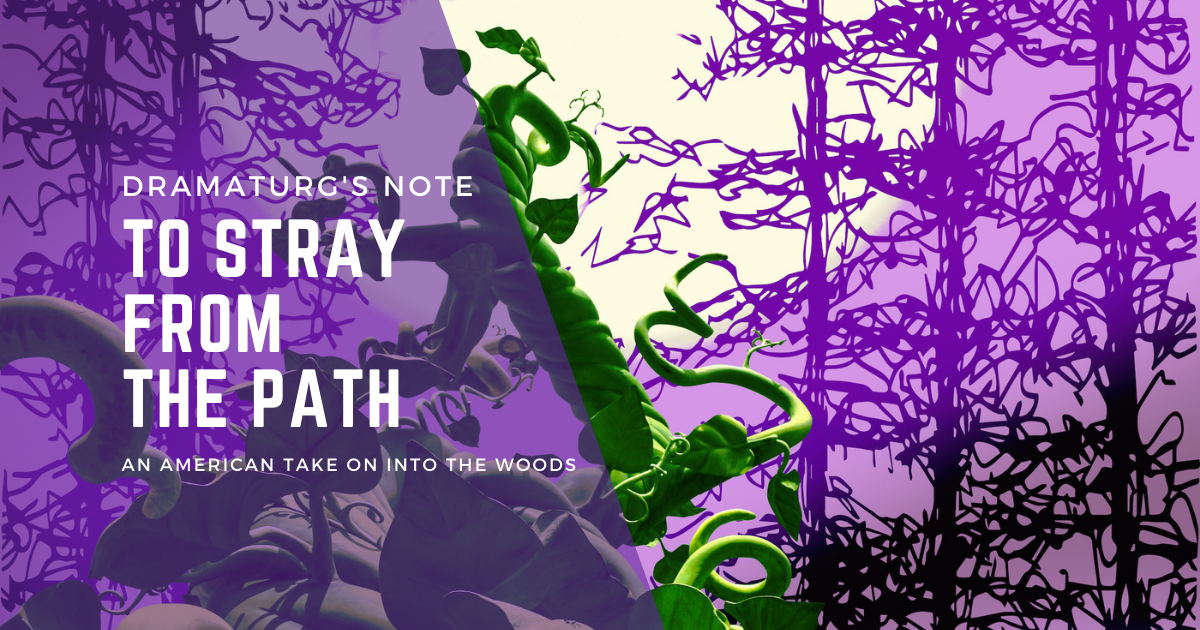 Dramaturg’s Note by Ciara Berardi (Dramaturg, Into the Woods)

James Lapine (book) and Stephen Sondheim (music and lyrics) started developing Into the Woods in the 1980s by drawing plot lines and characters from a variety of Brothers Grimm fairy tales, such as Little Red Riding Hood, Rapunzel, and Jack and the Beanstalk. The original San Diego production premiered at the Old Globe Theatre on December 4, 1986 and ran for 50 performances, later coming to the Martin Beck Theatre on Broadway on November 5, 1987.

Intrigued by the misconstrued morals of the main characters of these stories, though finding that the stories were very short, Lapine and Sondheim created the Baker and his Wife to add to the larger story they were composing. The first act of Into the Woods focuses on each character’s individual quest, while the second act is about the consequences of their actions, for better or worse. The Baker and his Wife want to start a family, though are cursed with barrenness. Rapunzel is trying to find her place in a world from which the Witch has kept her hidden. Cinderella is looking for her identity, and her prince. Little Red Riding Hood is supposed to put one foot in front of the other on the path to get to her grandmother’s house, but strays from the path, only for it to go wrong. Jack dreams of being rich and helping his family, but is consumed by greed and unleashes a Giant upon the land. What happens when we get what we want without thinking about possible consequences?

With the theme of venturing into unknown territory in order to achieve a greater goal, we decided to evolve Into the Woods from a European fairy tale into an American one. As the production dramaturg, my goal was to discover the true meaning behind what an American fairy tale stands for and how Emerson College students might feel a connection towards it. This research led me to one of the most influential American fairy tales: L. Frank Baum’s The Wizard of Oz. Going through the rehearsal process of Into the Woods and seeing the connection between this fairy tale and Oz, I can say that Oz is an ideal metaphor for the American Dream. Oz, the city, relies on industry: you take scraps, bits, and parts and assemble them into something new. It’s a story of being given a challenge, facing dangers, making friends, and finding yourself. America is the opportunity to be somebody. The American value is self-reliance. The American Dream is to find the thing that will bring you (or Dorothy, Cinderella, the Baker or his Wife) happiness. In an American fairy tale, you are on an adventure to find your place in the world, your identity, where you fit in. At Emerson we know we do not need a prince to rescue us; we go out and solve our own problems, and learn when to ask for help along the way. Like the characters in Into the Woods, we are all trying to find our own path.

Emerson Stage’s production of Into the Woods opens in the Cutler Majestic Theatre on Thursday, April 14 at 8 p.m. EDT and runs through April 16 at 8 p.m. ET. More information and tickets are available at emersonstage.org/into-the-woods.