Elizabeth Parfitt wanted to get first year writing students to be engaged, motivated and to feel like their classroom work was important and relevant.

The WERS News team wanted a professional looking website – but WERS is run entirely by students who have limited time, resources, and web development experience.

Tim Riley wanted an easier way to manage his files and collect assignments.

Surprisingly, all 3 problems were addressed by using the same tool.

WERS News is an AP award-winning radio news organization that is entirely student-run. Their audience, however, is not limited to fellow students: their largest listener demographic is middle-aged Boston area listeners not affiliated with the Emerson community.

They needed a website that reflected their stature as a serious public radio news outlet. They had the content: their existing site had ~1000 posts, but it was cobbled together on an outdated and user-unfriendly platform. Webmaster Melyssa Cantor’s goal was for the new site to be clean, simple, and user friendly. It should be a place where listeners could find everything they might need: audio and written reporting on current news stories, breaking news and photos via Twitter and Flickr, and archived audio of award-winning programs.

The problem: they were students with many deadlines, a busy news organization to run, and not all of them had extensive web design experience.

The students decided that none of the free themes fit their needs, so they ended up buying a theme and then customizing it further. In order to get the radio content online, they found a widget that converted the audio to mp3s and then posted the mp3s in a text box. They used other widgets to pull in images from their Flickr account and tweets from their Twitter stream. 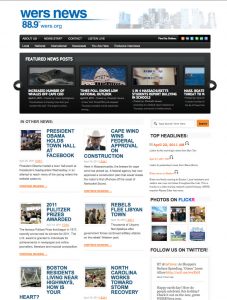 Every day there are 2 web writers who each write at least 3 stories per shift. The stories are published as ‘pending review’, and Editor in Chief Kyna Doles edits them before final publication. The writers and editors communicate frequently through email, as they are not often in the same space at the same time. WordPress saves each revision so that writers can see what edits have been made. All of the web writers have editing permission so that everyone can fix any errors they notice.

“A lot of what we had to do was testing things and trying them out. I’m not a designer, so I was nervous, but this was surprisingly easy! Every time we thought ‘it would be so great if WordPress did this’, we found a plugin or widget that did it.” – Kyna Doles

4 thoughts on “Emerson on WordPress, Part 2”